III
Weep, weep, weep.
Flora, bring the children dear,
Bid them deck this bloody bier,
No festive garlands, brightly strung
But pale flowers on our dear ones flung.
Viola, with dewy eyes—
Weep thy tears of Paradise.
Lily toll thy waxen bell,
Toll thy life out in their knell.
Laurel with the cypress twine—
Myrtle and sweet columbine;
Cassia and lime trees swing—
Star-like incense o’er them fling,—
Jasmine and sweet orange blooms,
Die in fragrance on their tombs.
Hyacinth and Phoebus dear,
From thy chalice drop a tear
Sweet as honey dew that fell
From the fabled Asphodel—
Wild flowers blossom on each brow
Snowy vestals breathe love’s vow—
Amaranth doth crown our heroes now.

IV
Toll, toll, toll,
O, ye fearful, warning bells,
Down to the murderers’ deep hells,
Send swift your piercing fitful notes—
Send your terrifying strokes!
The brand of Cain, resteth on one
Whom falsehood freedom’s son.
High on the seat of his dark power,
He waiteth now the dreadful hour;
His minions see the light to-day,
And laughing—mock us—while we pray.
The Seasons drag their length along—
No hand hath yet avenged our wrong,
The silent stars with woe are pale,
The Hours die with a mournful wail,
Columbia—betrayed—distrest,
Folds her dead children to her breast.
Doth Justice sleep—his iron will
Palsied with woe? Or doth be still,
Await the Final Fatal day
Once promised? Lord, thou still dost say,
“Vengence is mine alone, I will repay.”

V
Toll, toll, toll!
By the scourge and lash and chain,
By the torture and the pain,
Which in Slavery’s dark night
Hid humanity from sight;
By their patience and their tears,
By their Faith, lasting thro’ years;
By the blood in Kansas’ shed,
By that snowy, martyr’d head;
By the message John Brown bore
To Heaven’s purple Temple door,
That voice whispers forever, ever more,
“I will repay.”
By the war Fiends’ horrid cry,
Bidding Freedom yield or die;
By our Sons and Fathers slain;
By our tatter’d banners’ stain;
By our murder’d President;
By the hours in dungeons spent;
By the latest, foulest wrong,
Wrought by Treasons’ serpent throng;
By these walls stained with their blood;
By these streets, o’er which the flood
Of precious life—tides ebb’d away.
By Brave Dostie’s words that day.
“O Let the good work still go on”;
By Horton and young Henderson
Bearing youths banner as he fell;
By Loups’ loving, sad farewell;
By those slaughtered, murdered ones,
Freedoms’ latest franchised sons;
By the tombs o’er which we pray;
By our tears and prayers to-day;
By tardy justice long delay,
He “will repay.”

Toll, toll, toll!
Oh, ye silver, starry bells,
Swinging from yon azure wells,
Something in your ringing tells
We have need of Faith and Prayer
For our dead—due not—lo there
Opening the golden gates
The avenging angel waits,
Flowers bloom above the plain
Where our brave heroes were slain,
From the martyrs’ funeral pyres
Lo, Religion lights her fires,
From the fields of bloody strife
Liberty renews her life,
See, our lov’d our martyr’d slain
Join the shining starry train
Rob’d in light, crowned with love
Bending from their homes above.
Justice comes with kindly band
Peace, white winged—waves her wand
And Freedom—chasened’t smileth on the land
Thine hour is come—Oh, Liberty.
Gethsemane, and Calvary!
Christ of all truth and love make us like Thee. 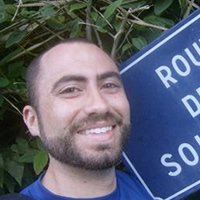